We are pleased to share the reviews of Shades Within Us: Tales of Migrations and Fractured Borders from Booklist (American Library Association), Library Journal, School Library Journal, and Foreword Reviews. 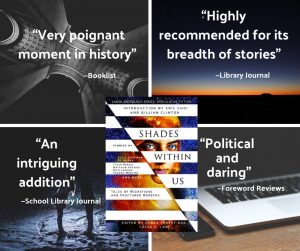 “Shades within Us is the fourth of the Laksa Anthology Series (after Where the Stars Rise, 2017), collections of speculative fiction dedicated to different social issues. The first three approached mental health, caregiving, and Asian identity; the newest installment addresses issues surrounding migration and borders at a very poignant moment in history. The very first story delves into the horror, pain, and inherent racism of a border wall; despite being speculative, many of these stories read like they were ripped from present-day headlines. The book goes beyond immigration, though, exploring what it means not only to physically migrate to a new place but also to face complex personal challenges and move away from comfortable mindsets. Readers are encouraged to understand that our journeys in life do not start and stop when we find new homes but rather are a series of constant, ongoing experiences that have an impact on who we are entirely. The many authors highlighted by this collection do a great job of asking readers not only to reflect on their own lives but also to consider the lives of others.”–Rachel Colias Copyright 2018 Booklist

“A young girl finds that getting beyond the Wall means a trip among the layers of her world in Rich Larson’s “Porque el Girasol se llama el Girasol.” Battle games and movie invasions have nothing on real life in Karin Lowachee’s “Invasio.” In Amanda Sun’s “The Travellers,” one man assesses Taiwanese time-traveling migrants, while a family must “Remember the Green” as they are forced into city living in Seanan McGuire’s short work. Twenty-one stories take readers through the minds and actions of migration: both in real and imagined places, by force or their own volition. The movement is more than physical, as the need to reassess personal convictions comes through all of these writings. Topics such as family and home are at the core, with issues of discrimination and mental health also present. VERDICT An engaging collection of poignant travel through time and space. Highly recommended for its breadth of stories that look at having to leave home-or discover it.”–Kristi Chadwick, -Massachusetts Lib. Syst., Northampton © Copyright 2018. Library Journals LLC, a wholly owned subsidiary of Media Source, Inc. 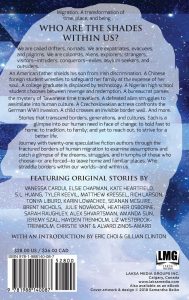 “In this third installment in the series, 21 established authors tackle the subject of human migration. An introduction page explains that migration is more than simply a change in location but also an alteration in mind and spirit. Short, speculative stories explore this idea of migration of the soul, mind, and spirit. They also examine the concept of fractured borders, both visible and invisible; there is a price to be paid for attaining a new life or reality. All tales have some otherworldly component whether fantasy, science fiction, or paranormal. Particularly strong offerings include Rich Larson’s chilling “Porque El Girasol Se Llama El Girasol.” Young Girasol and her mother join refugees fleeing a futuristic Mexico into the United States, but they must travel through a dangerous, heavily armed border wall. Amanda Sun’s “The Travellers” and Sarah Raughley’s “The Vagabond of Trudeau High” are other standouts. Many selections are no longer than eight pages in length, although a few are as short as two pages and others as long as 15. This volume includes sections about the contributors and the editors as well as mental health and antidiscrimination resources. VERDICT An intriguing addition to short story collections.”–Kristen Rademacher, Marist High School, Chicago © Copyright 2018. Library Journals LLC, a wholly owned subsidiary of Media Source, Inc.

“Borders both real and imagined, dystopian futures caused by catastrophic climate change, and devastating alterations of the past vivify the twenty-one stories of Shades Within Us. In the tradition of speculative and science fiction, the collection explores some of the most divisive issues of the present through the guise of different times, dimensions, and characters. The stories range from epistolary to lyrical to traditional narratives, with content that is often unexpected, frequently harrowing, and always thought-provoking.
The volume begins powerfully, imagining a U.S.-Mexico border that morphs into a metaphorical, multidimensional space. Other stories call forth equally engaging situations: A disapproving father reunites with a son who has been modified with gills to live underwater. An alien from a defeated planet sneaks his language into his new world by etching it onto his body. Temporal engineers from the future create tunnels that return them to the past as refugees from an unknown future. A farm family endures a resettlement from the green place to the gray, but the power to find the green still grows within them. Nazi Germany is evoked to create a space for speculation or supernatural interference.
With each story, the authors expand their settings and reality into a universe of broader potential to make sense of the tensions that plague the twenty-first century. Even as they represent foreign existences, the problems remain the same—family, love, belonging, identity, survival. Immigrants still work to make new homes, and government still debates their care, entrance, and control.
A few of the stories revisit well-worn tropes, but most take a fresh approach to their subjects and conjure terrifying futures brought on by climate change, greed, and corruption of power. Political and daring, this collection adds to the future imagined by Philip K. Dick, George Orwell, Margaret Atwood, and Aldous Huxley.”–Camille-Yvette Welsch (br/)