Chris Szego has been the manager of Bakka Phoenix Books since 2000. She brought the current owner, Ben Frieman, on board when the former owner sold the store in 2003.

Here is a conversation with Chris Szego.

What is your typical day for you at the store? 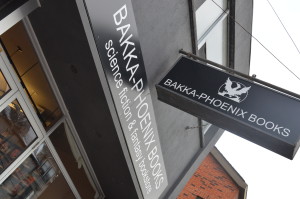 The great thing about being an independent bookseller is that there’s no such thing as a typical day. There are always new books to unpack, recommendations to make, customers to talk to, and of course, all the administrative business that accompanies any small business.

What advice do you have to offer to an author who would like to conduct an event at Bakka Phoenix Books?

Important note for authors: a bookstore event is not necessarily the best plan.

Are you a first time, self-published author? Then, a bookstore event might not be the best fit for you. On the other hand, do you have lots of family and friends who would like to come out and celebrate with you? Then you might be all right.

Even dedicated, regular customers will not come to an event if they don’t know the writer. In fact, they’ll avoid coming to the store at all.

But if you really want to have an event, get to know the bookstore and booksellers when you DON’T want something from them.

First, booksellers are people too, and we’re much more likely to want to help out when we have some sort of connection. Second, the more familiar you are with the store, staff, and local community, the more robust your event will likely be. 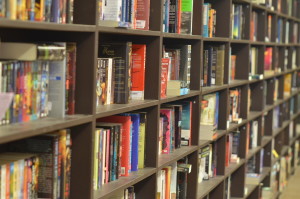 Do you believe that ‘science fiction is not just a genre, it is a community?’ Why?

Why? Because it is.

It’s a community that exists in person, at conventions and fan gatherings and the like, and it exists online. It ranges from hard core fans who can name every episode of their favourite SFF show to people who just enjoy watching the Marvel movies. It makes costumes, raises money for charity, creates art, and connects people who love a thing to other people who love that same thing.

Based on your bookstore sales, has the public reading pattern changed in the past five years? What sub-genres are popular then and now?

The biggest change physical change has been the drop in mass market sales and the rise in trade paperback and hardcover sales (we’re not yet able to sell ebooks, but we’re working on that. Ebooks, by the way, have taken up the sales that the mass market format has lost).

As for subgenres, they come and go, regular as tides. Vampires are cyclical; post-apocalyptic stories have just about hit their limit; and I’m really, really REALLY tired of zombies. But the truth is, good stories well told will find an audience, even if they’re not the flavour of the month.

What are your current favourite reads?

Currently, the store staff is loving (and recommending like crazy): Goblin Emperor by Katherine Addison; Ancillary Justice by Ann Leckie; The Martian by Andy Weir; The Rook by Daniel O’Malley. 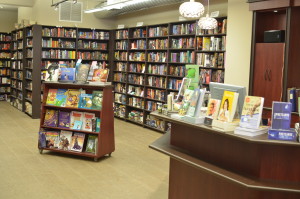 What has Bakka Phoenix Books accomplished after moving to the current location? Did owning the building provide more flexibility to try out new things?

Owning the building means stability more than anything else. It means the freedom to make the store look however we want it to look. And eventually, it will mean the end of renovations.

What is your plan for Bakka Phoenix Books in the next few years?

More of the same. Please!

This sounds like a cop out, but it’s true: there are too many to count.

In April alone, we’ll have 8 events, some onsite, some off. Now multiply that by 43 years, and you can see why it’s hard to choose.

What advice do you have for someone who wants to get into the bookselling business?

Know the area you’re moving into; know your potential customers; know how you’re going to make yourself different.

Be prepared to try a lot of different things, in terms of attracting customers and attention. Some won’t work, and that’s okay. There isn’t one solution.

Be ready to adapt and change with the times (and those times will change fast).

But there is still a place in the world for physical books. A big place: more physical books were sold last year than any year previous. As large bookstores close across the continent, small bookstores are opening in record numbers.

If you’re prepared to put in the work, you could be one of them.